Gameloft’s Modern Combat series has long been the benchmark for military first-person shooters on mobile, and like its console and desktop inspiration Call of Duty, it would offer high end visuals, an action-packed single-player campaign, and a robust online multiplayer to mobile gamers every couple of years. But the times they are a-changing, and what once worked for the Modern Combat series wasn’t cutting it in today’s App Store climate. The last entry in the series was Modern Combat 5 in July of 2014, and after trying to launch as a fully paid premium title it floundered and promptly pivoted to a more typical free to play model, which has allowed it to stay afloat and keep a decent flow of updates coming for the past few years. But the old Modern Combat formula was in need of a serious shakeup, which is what the company hopes to do with Modern Combat Versus.

First officially teased back in October, Modern Combat Versus is a multiplayer-focused entry in the series, as its name implies. It’s not a sequel to any other Modern Combat game, and it uses a brand new engine which will offer some nifty new tricks for the latest devices. There will be no single-player campaign, as Gameloft would rather focus all of their energy in one direction rather than splitting their dev teams into multiplayer and single-player groups. As much as I love the completely over-the-top drama in the stories of the Modern Combat games, I can’t say I’ll miss single player too much. But, just because there’s no proper campaign doesn’t mean there isn’t some story flavoring to bring meaning to all the multiplayer action, and you can see the first bits of this from the cinematic intro to the game below.

As you can see from the video, in Modern Combat Versus you’ll play as a variety of different “Agents” who all have unique personalities, abilities, and roles to play on a team. Gameloft will be soft-launching the game shortly, and for this soft launch they’ve announced that 12 different Agents will be available, broken up into 4 classes as detailed below:

Additionally, the Agents will be customizable by way of unlockable skins, weapon paint jobs, and unique kill signs, and they can also be leveled up to increase their damage output and health. On Gameloft’s social media, they’ve previously unveiled 3 of the 12 different Agents, all of them of the Assassin class. Those Agents are: Mi-Nu, SW1FT, and GH0ST, and today Gameloft has sent over the very first artwork for the 4th Agent they’re ready to reveal, the bad ass looking LOCK. 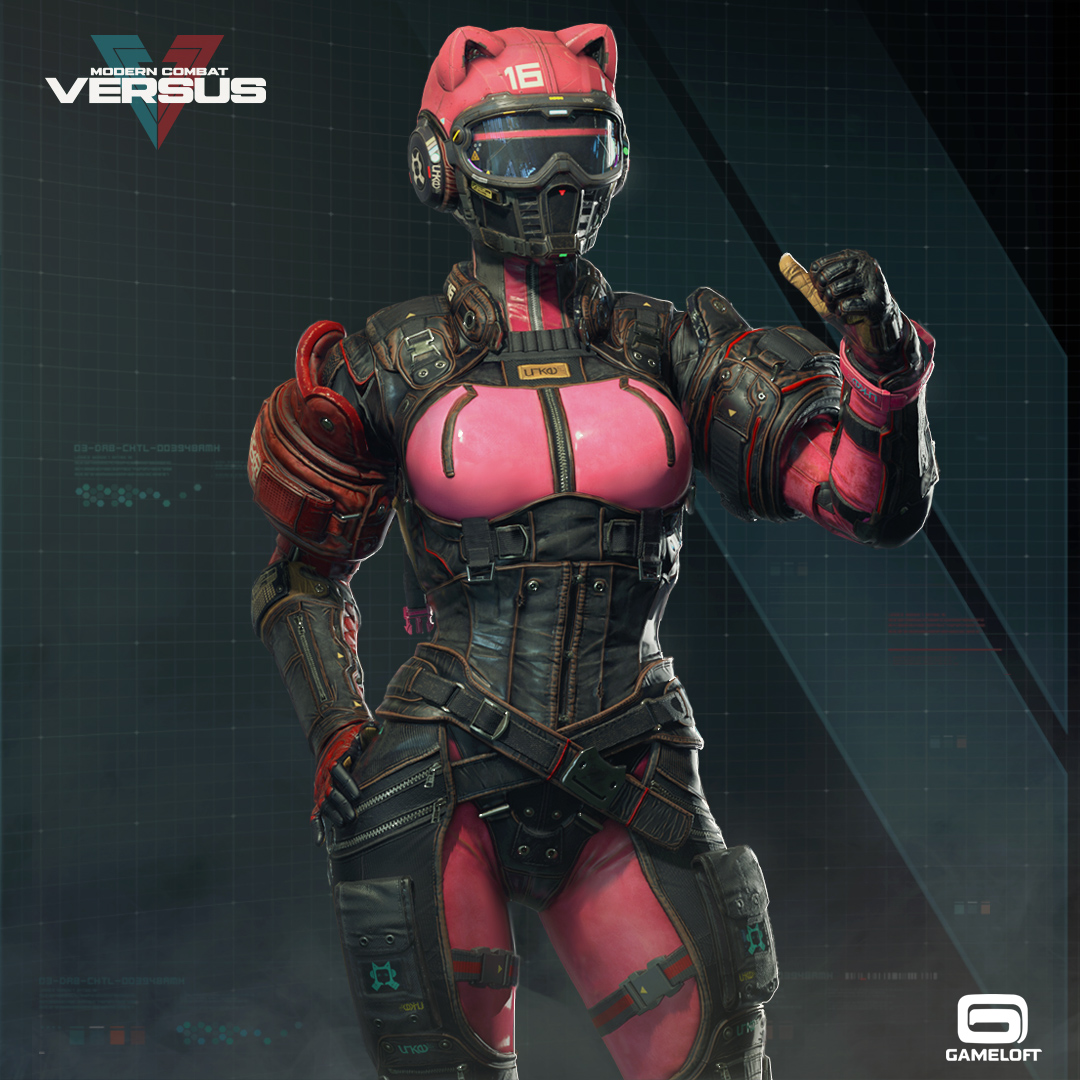 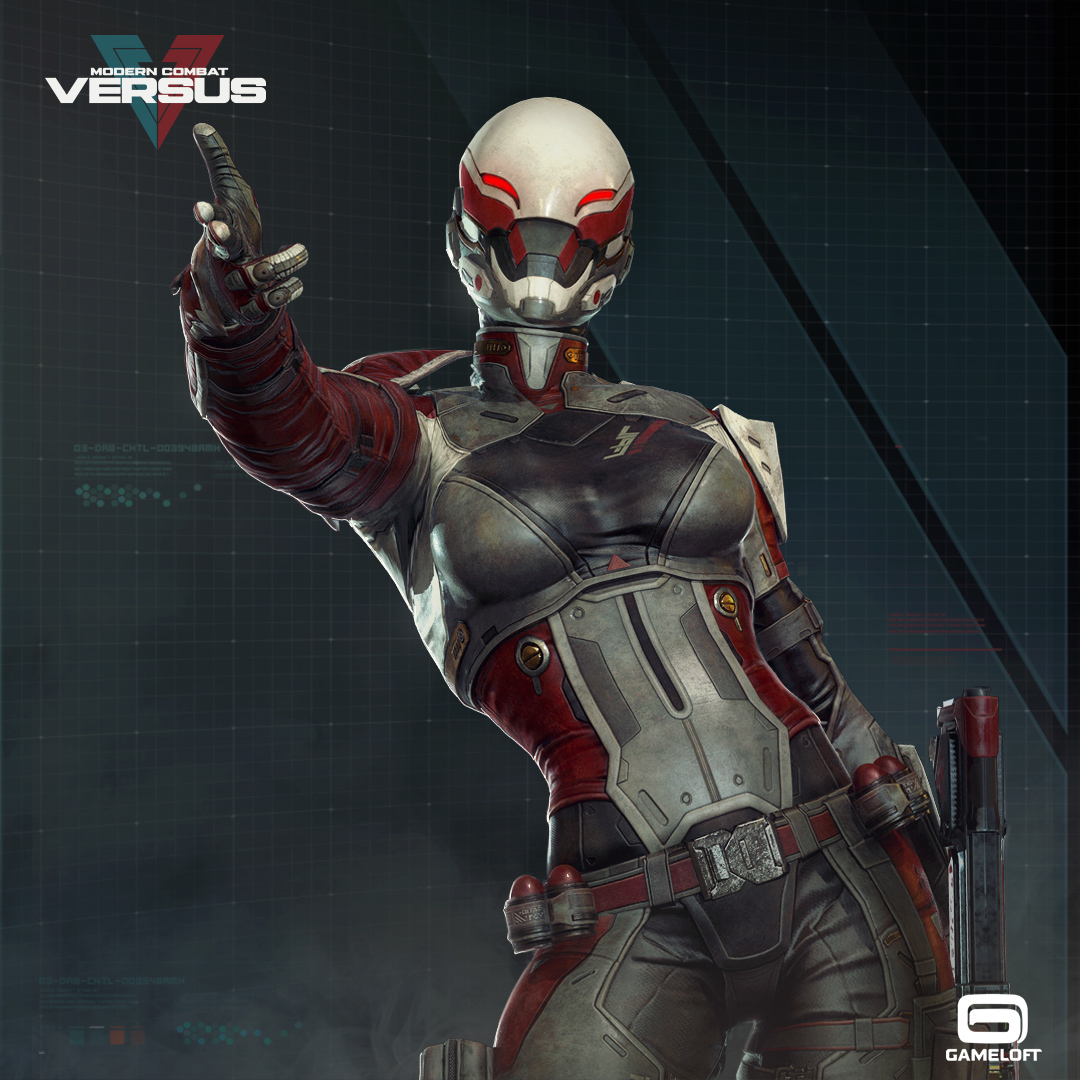 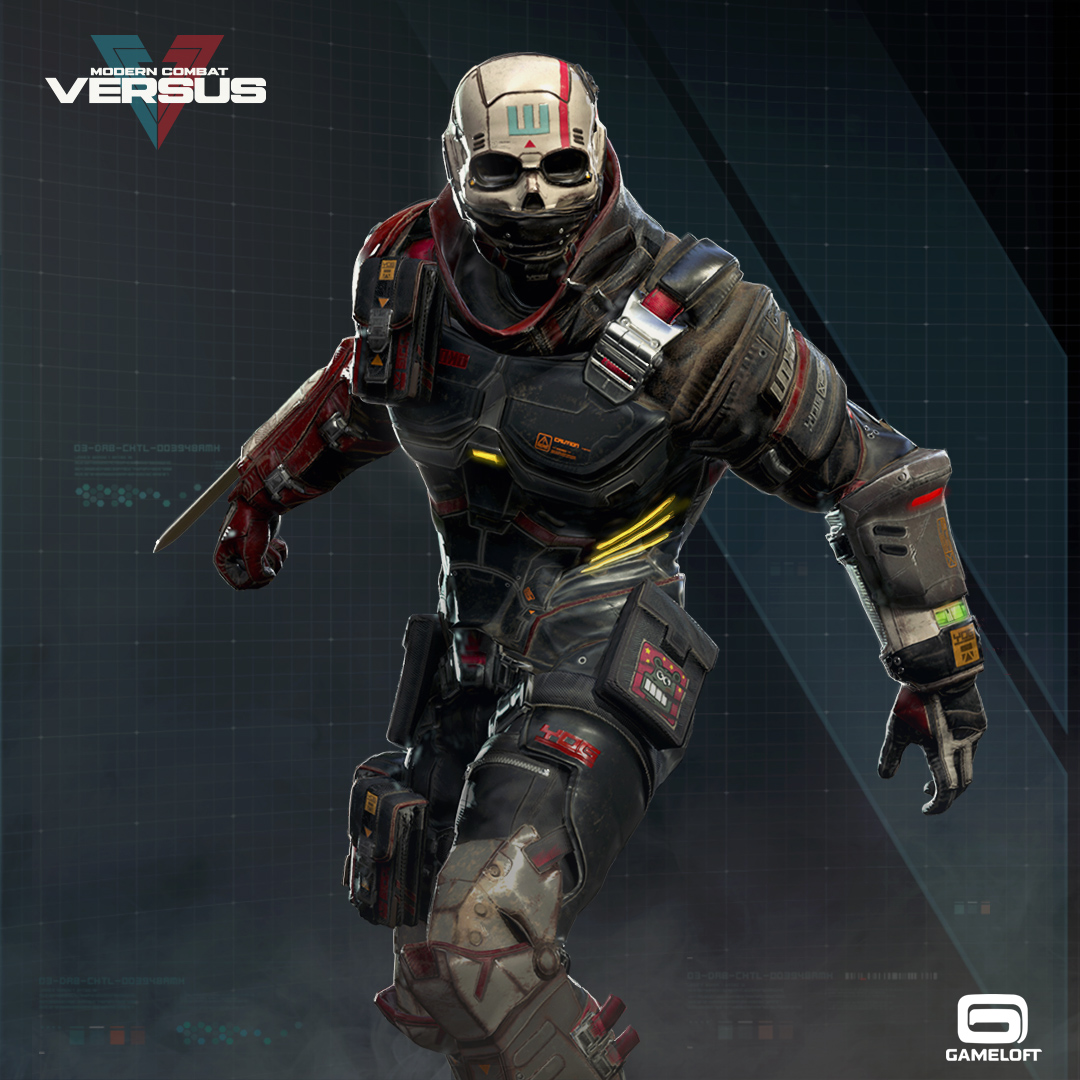 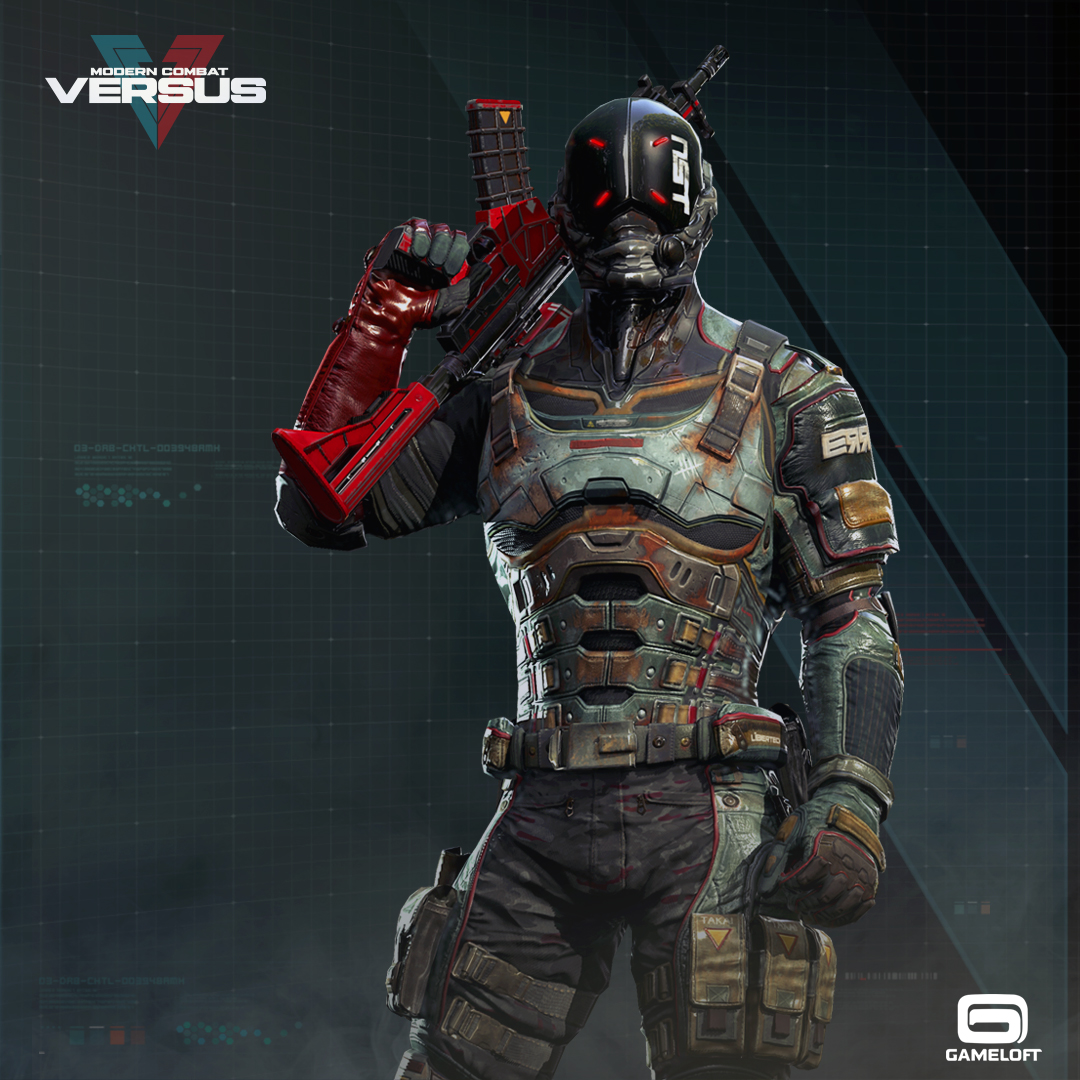 Like most of today’s popular multiplayer shooters, the variety of Agents and different classes in Modern Combat Versus lend themselves to more team-oriented online play. That doesn’t mean that those kill everything deathmatch experts won’t have a place on the team, though. The unique abilities of the Agents will require things called Core Charges to activate, and Core Charges are slowly earned over time but also earned more quickly based on your kills and assists. You can only store up to 10 Core Charges at a time, and different abilities can cost a different amount of Core Charges depending on who you’re playing as. So, by excelling with kills and assists, you’ll be able to deploy your special ability more frequently and thus be even more beneficial to your team overall.

Of course, with the different classes there will be players who can excel at a variety of different areas to help your team’s cause. For the soft launch, there will only be a single 4v4 mode called Zone Control, which is slightly different from similar modes from previous games. In Zone Control, there will be a stationary capture point that unlocks shortly after the start of a game. Teams fight for control of the zone, and at the end of the game the team who controlled the capture point for the longest wins the match. Pretty standard stuff but sounds like fun. Speaking of maps, there will be 5 for the soft launch of Modern Combat Versus, and you can see some in-game shots of each of those below, including the previously unannounced Slums which is based off of Modern Combat 4 fan-favorite map Dog Days. 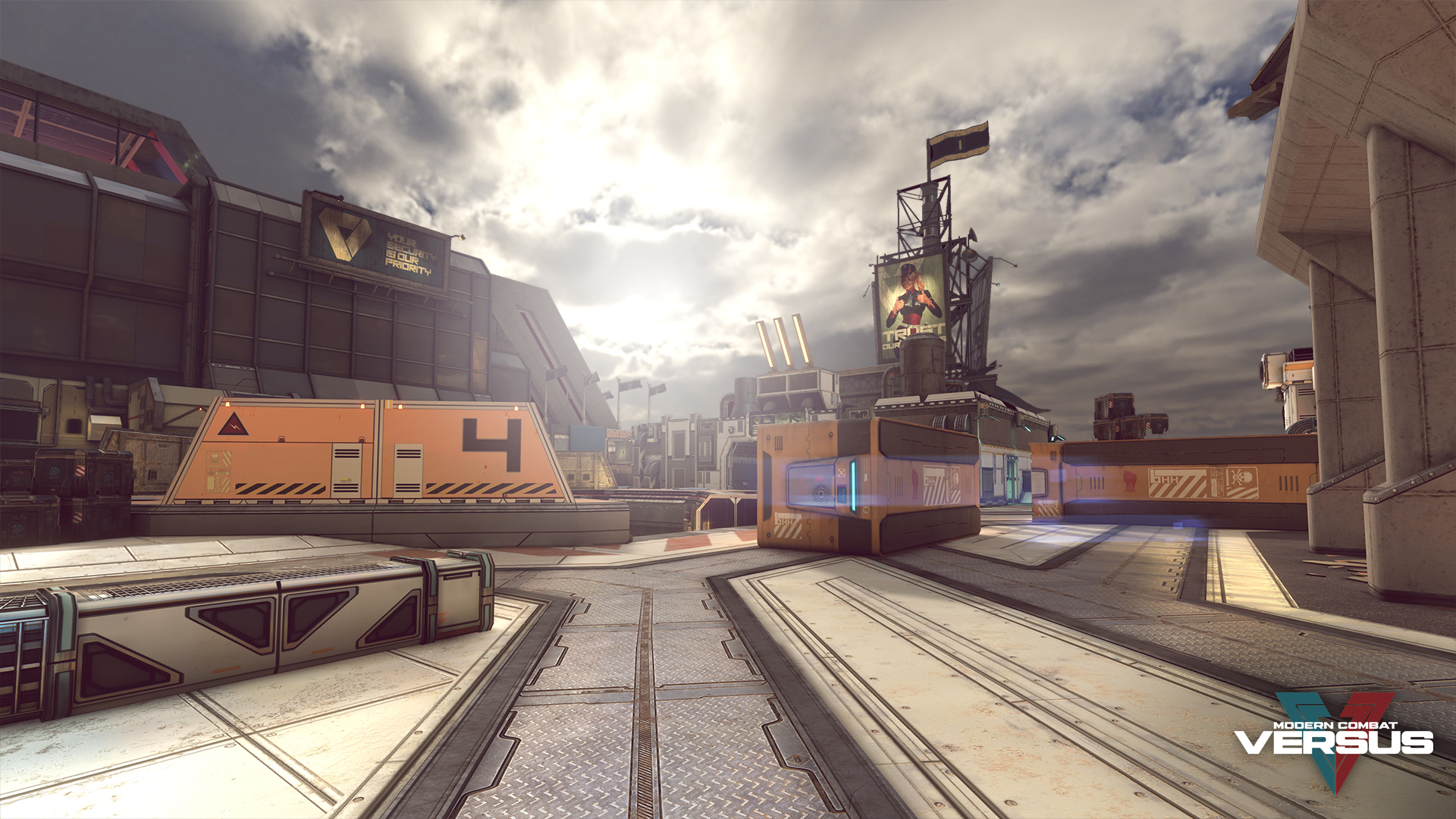 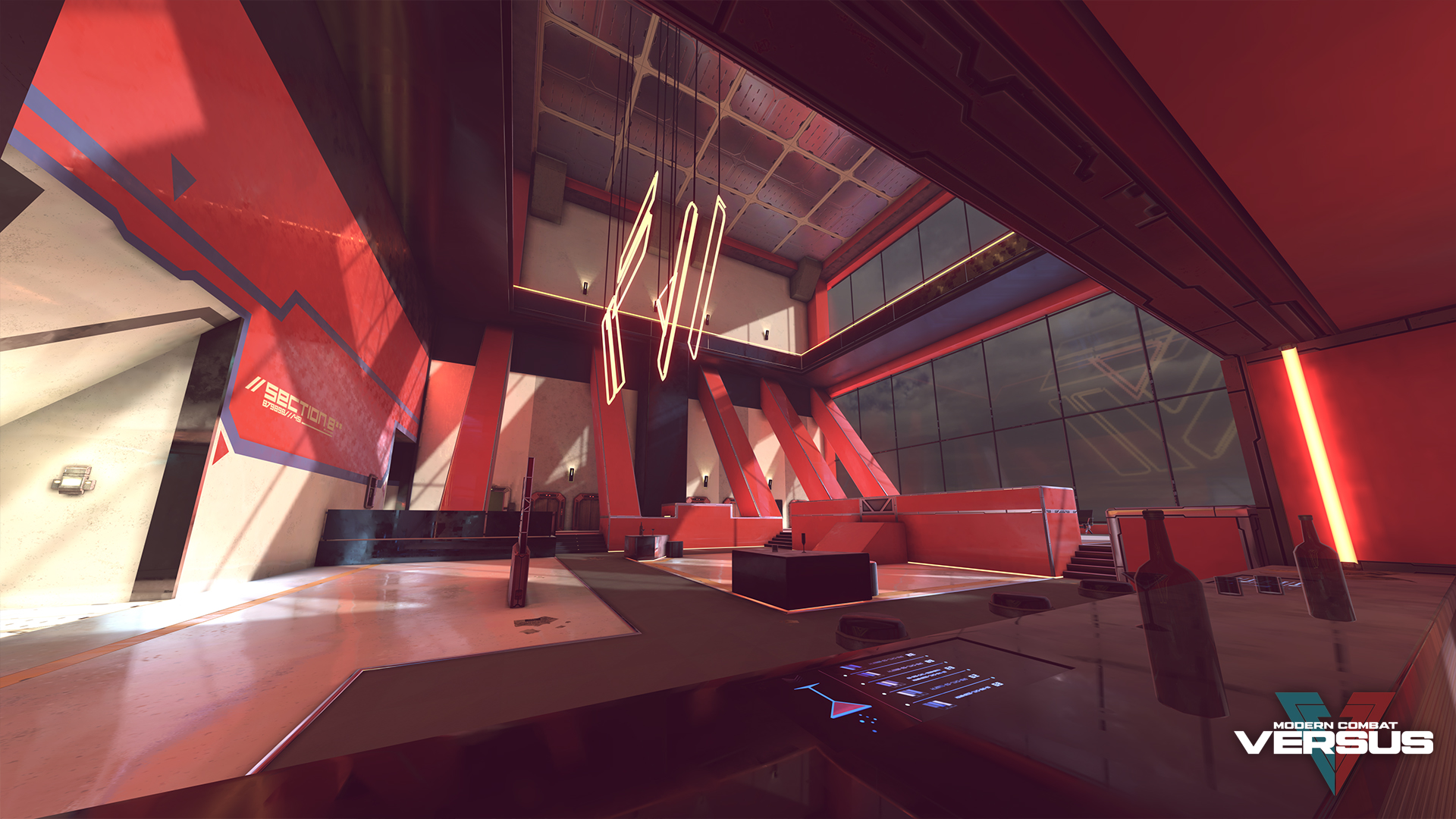 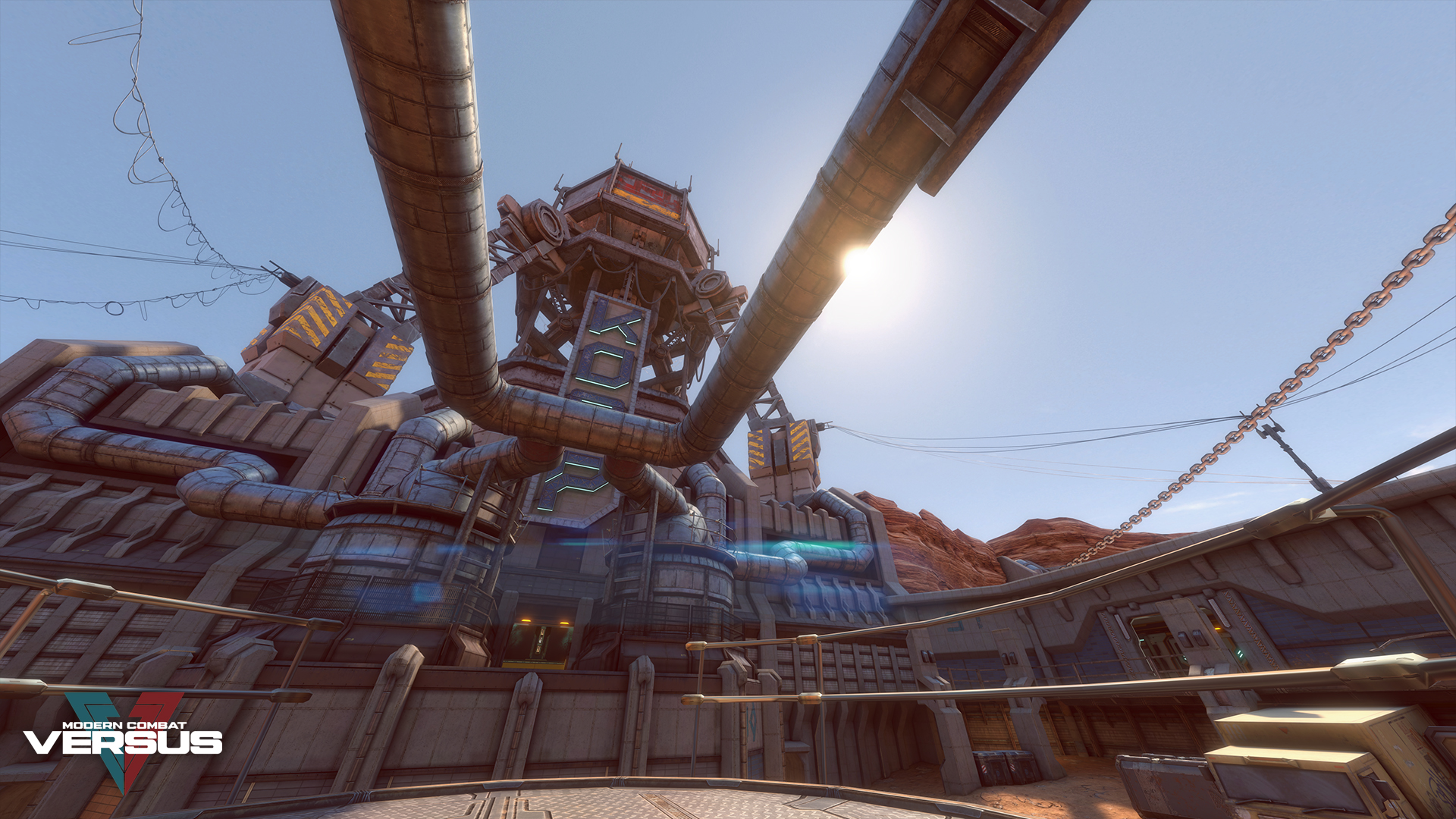 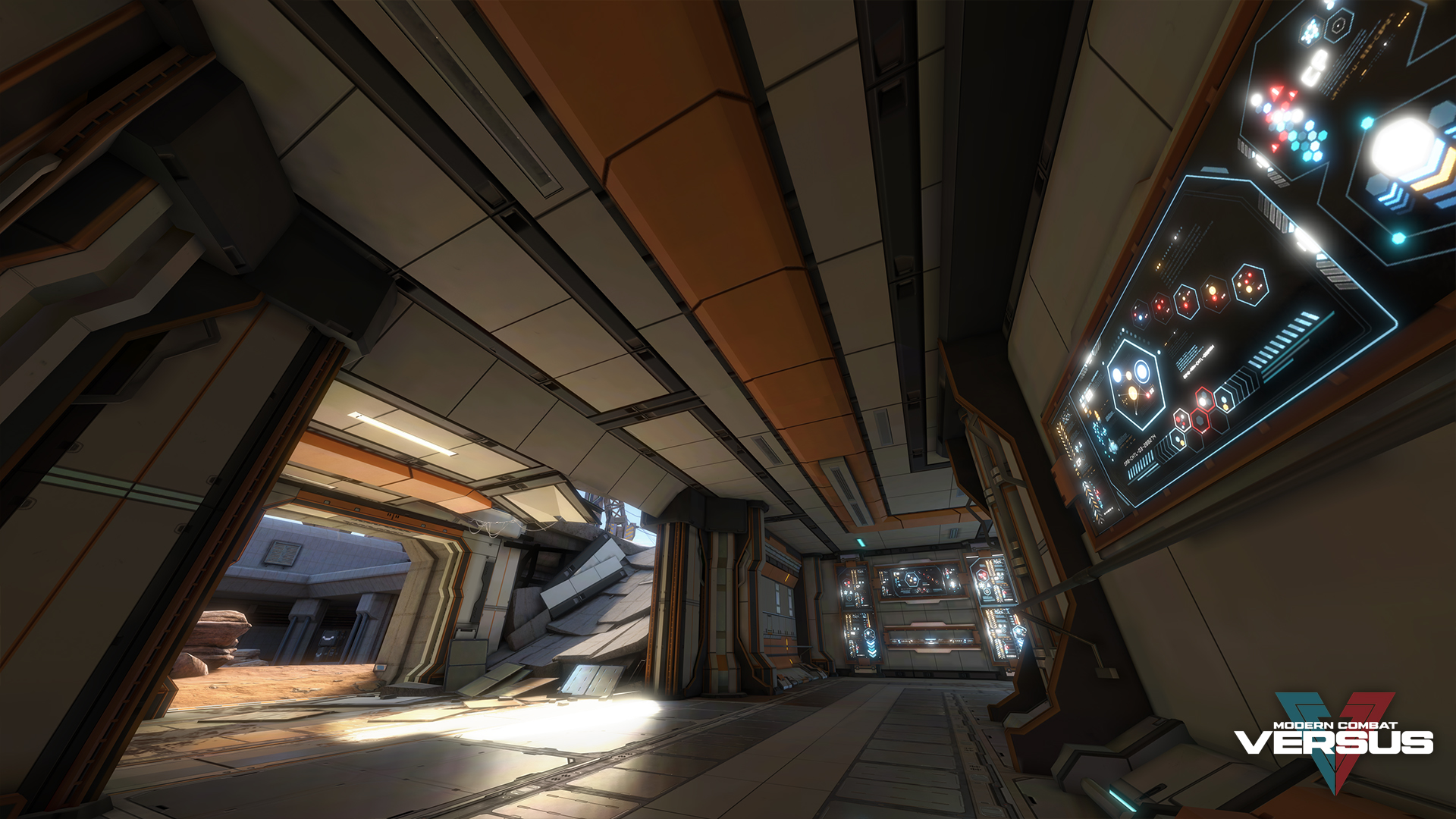 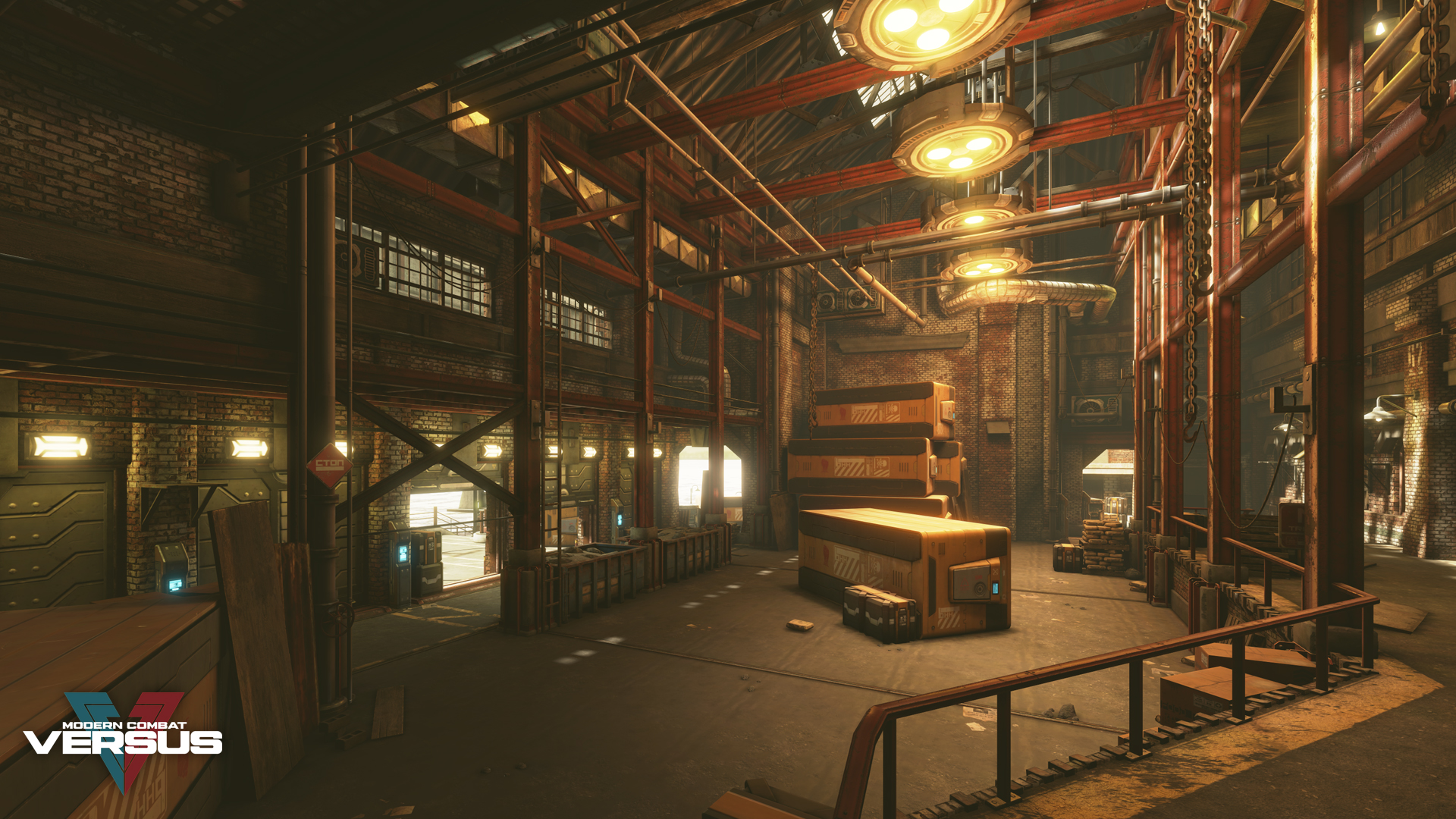 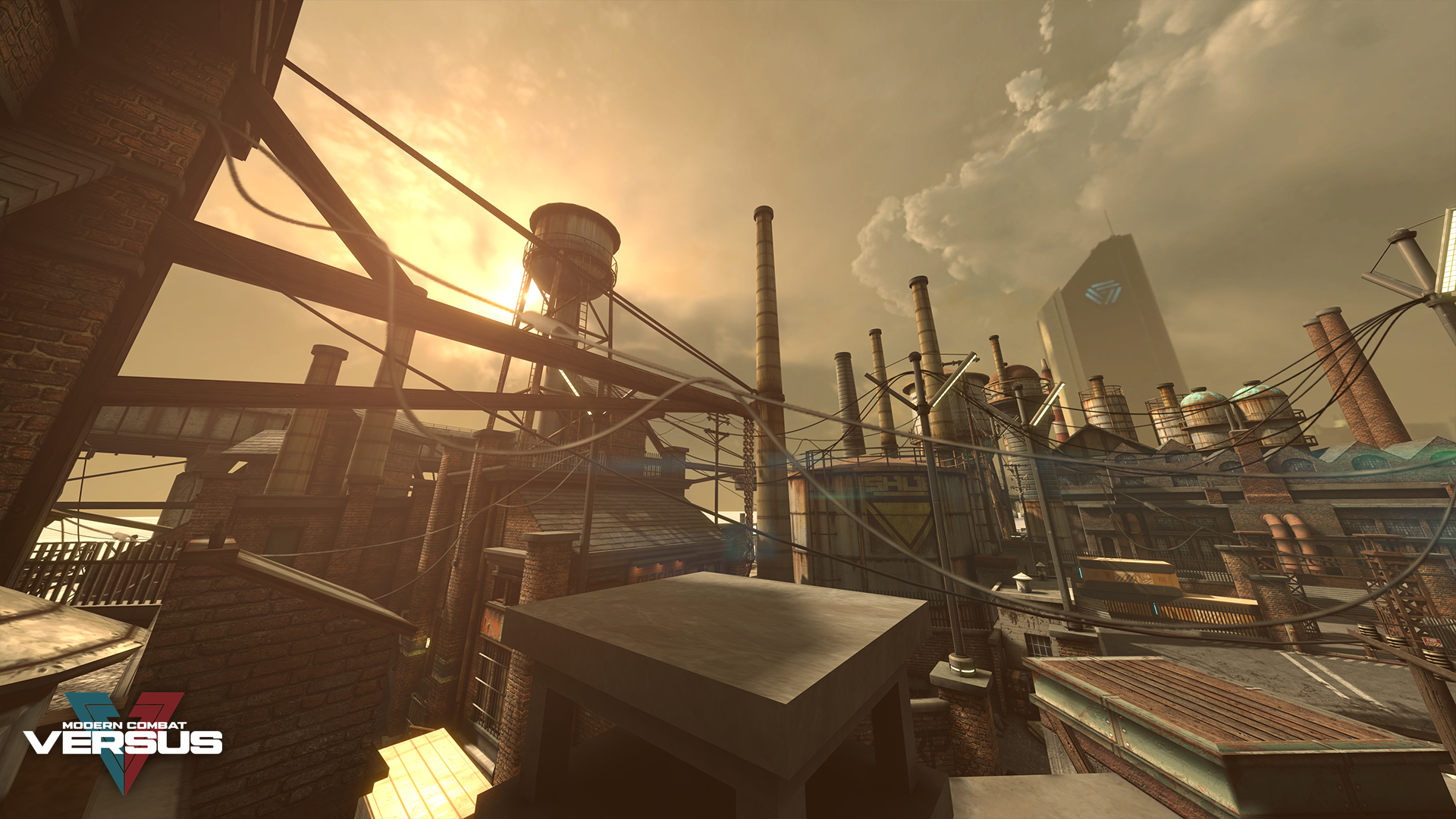 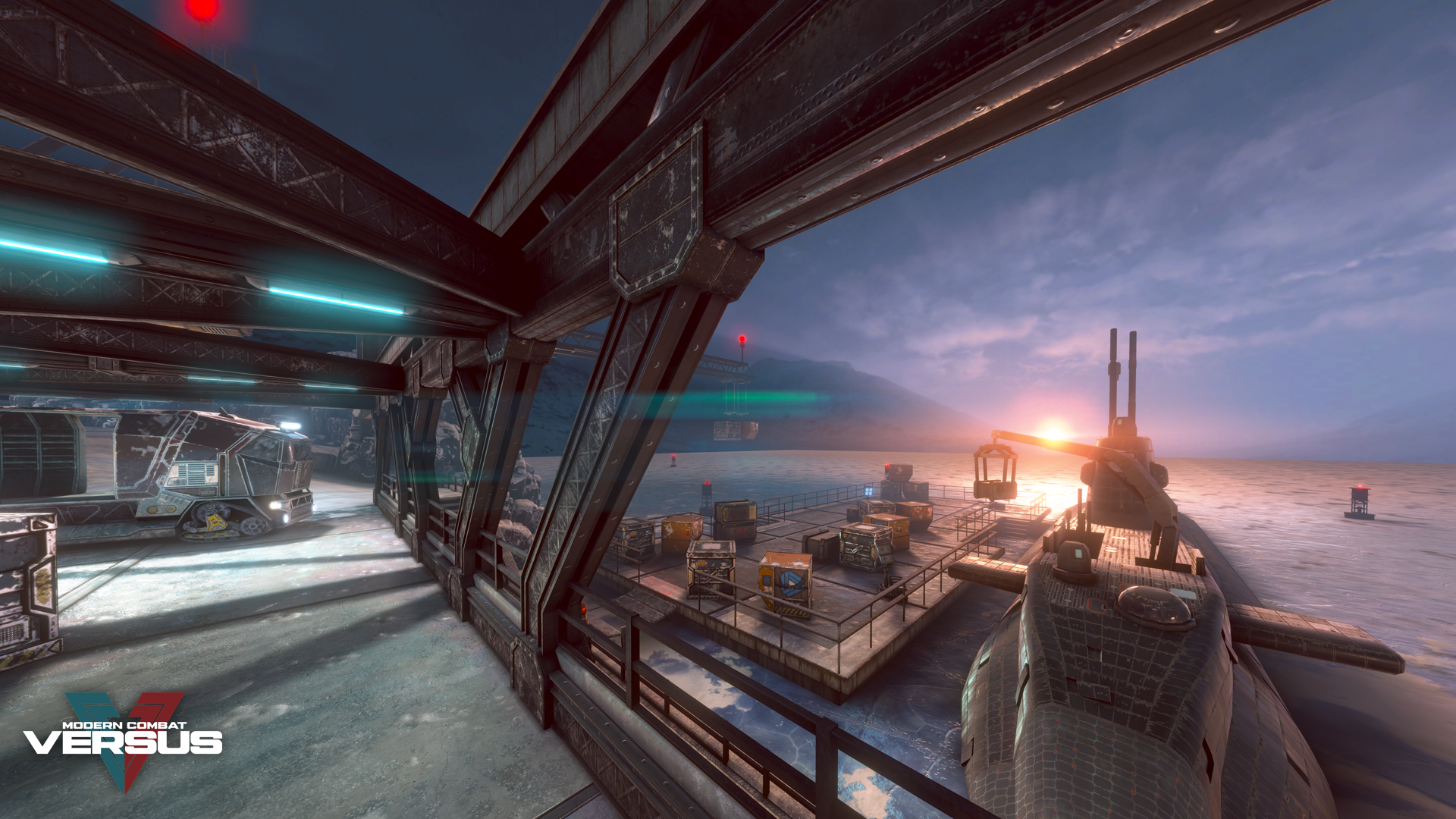 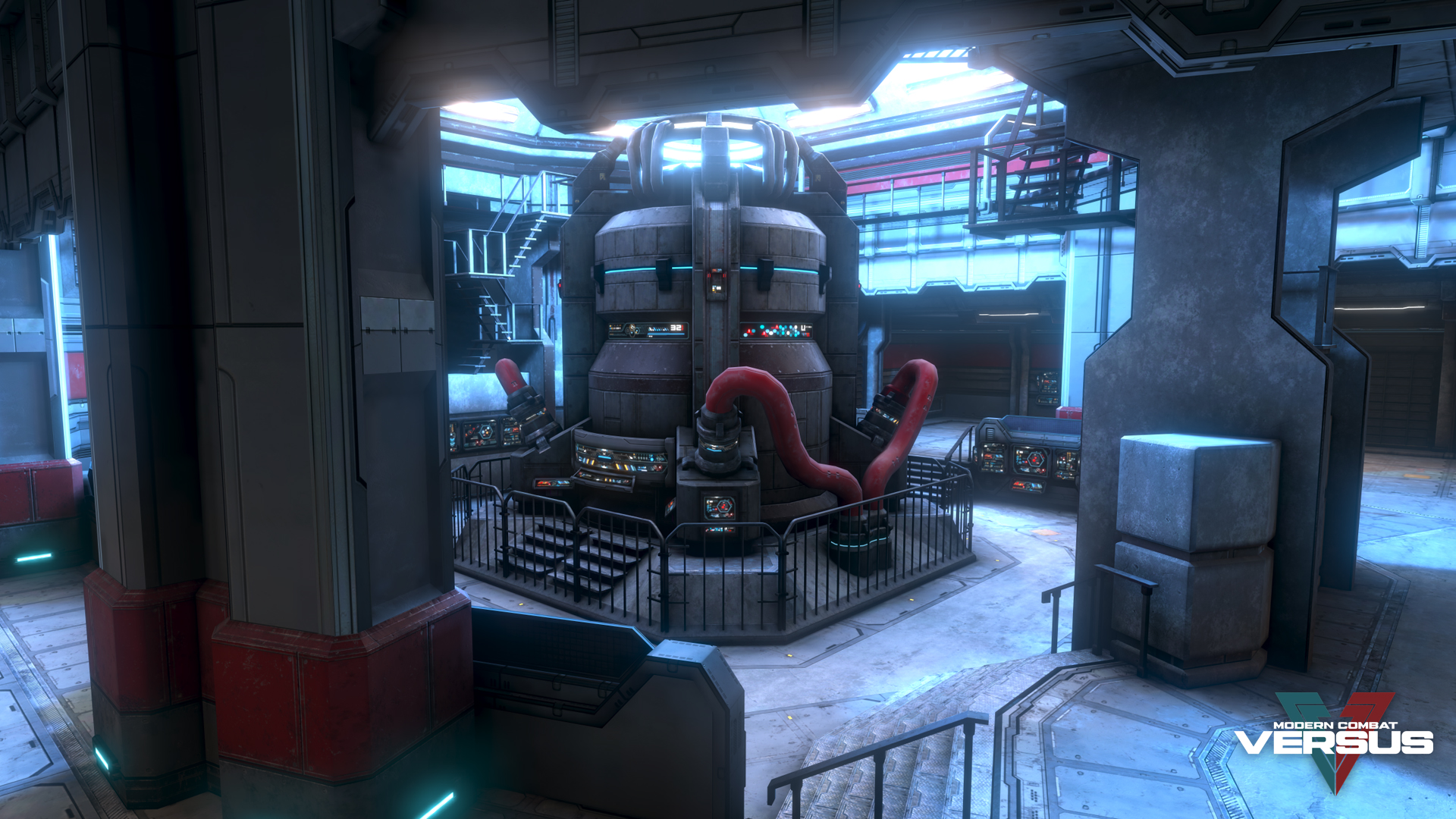 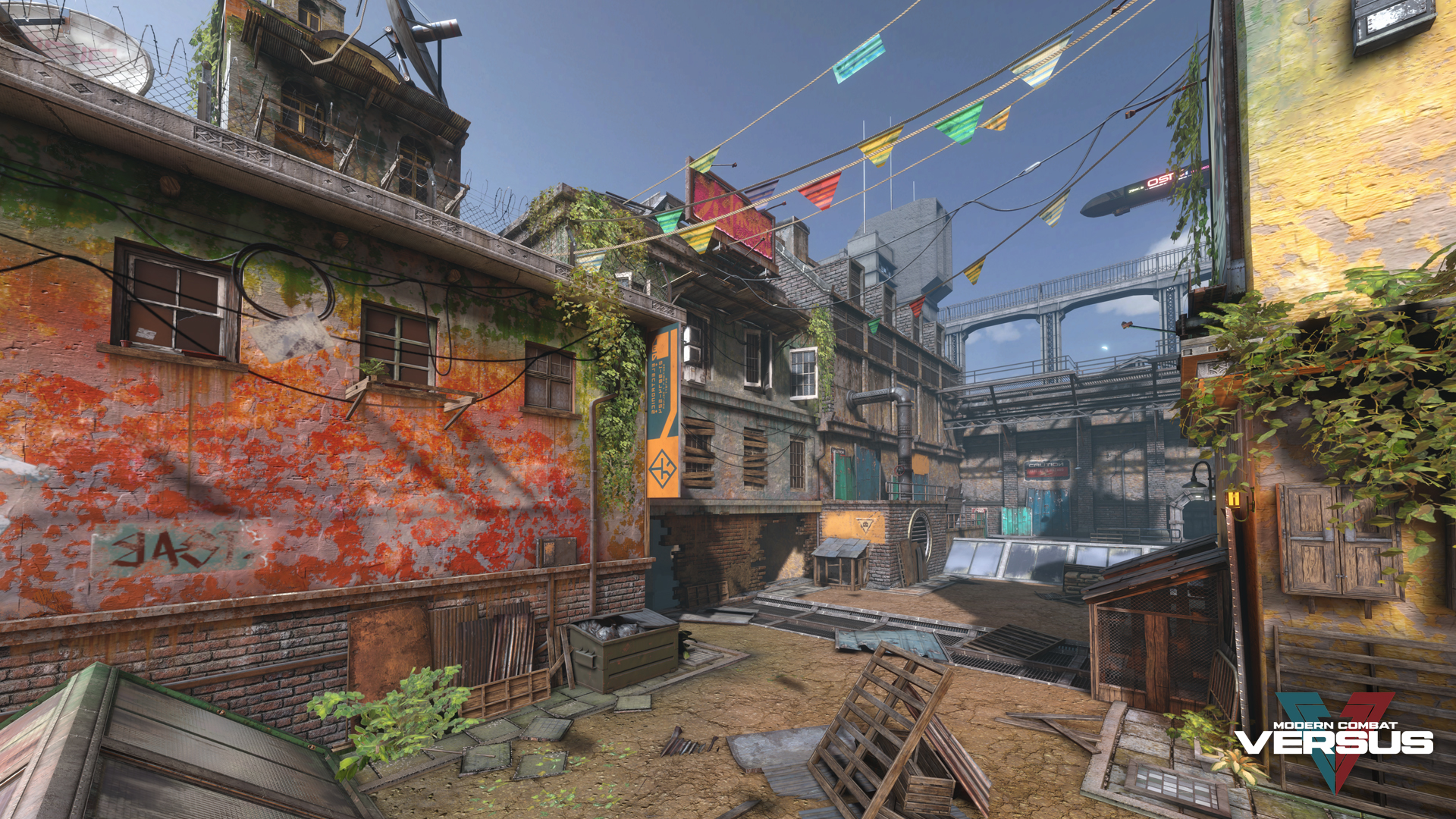 The final big point I want to talk about for Modern Combat Versus is the controls. First-person shooter controls have long been a sticking point on touchscreens, and Modern Combat games have always done a pretty good job of offering customization options so players could find controls that personally suited them. Still, there’s always an overwhelming number of buttons and UI elements onscreen that can be pretty intimidating, especially to more casual players. For Modern Combat Versus Gameloft has tried to strip down everything as far as possible to offer a clean and intuitive interface to control your character.

The entire left side of the screen acts as a virtual analog stick to move your character, with holding in a direction allowing you to sprint. The entire right side of the screen is used for aiming, with a double-tap activating the aiming down sights or an alternative action based on the ability of the Agent being used. Weapons shoot automatically to allow for this heavily streamlined control scheme, but Gameloft will also be adding a more traditional “shoot” button as well as support for controllers in future versions of the game. Additionally, each map will have at least 2 wall-running points that will allow you to access special areas, and you’ll simply need to sprint towards these areas to trigger the wall running. Finally, you’ll activate an Agent’s special ability by tapping an onscreen icon in the lower middle of the screen.

You can see these controls in action in the gifs below, which showcase the much cleaner UI and the third gif actually shows LOCK’s special “Augmented Reality” ability.

As a big fan of the Modern Combat series, I’m excited to see the direction that Versus is taking. While I’d love to have a single-player campaign to play through, I’m glad Gameloft decided to dedicate everything they have into making the multiplayer experience the best it can be. Multiplayer is always the long-tail of any first-person shooter release, and I imagine they’re hoping to keep Modern Combat Versus going for years to come. Also, as mentioned previously, the paid model hasn’t worked out so well for Modern Combat, and even older entries in the series have come to add IAP options in their paid versions to try and make the games viable. Obviously, Modern Combat Versus will be free to play right out of the gate, but Gameloft does promise there will not be any pay to win elements and there won’t be an energy system.

I’m also quite encouraged by Gameloft’s attitude towards how they’re launching Versus. They’ll have a region-locked soft launch happening possibly as soon as next week, and then will be expanding to different regions and removing the location locks to allow more players to join in. They have aspirations to move the game towards eSports as they have with Modern Combat 5, but they’re really adamant about having a well-balanced and polished version of the game before doing so, and so they’ll be very open to feedback both during the soft launch phases as well as after its worldwide launch. Once we’ve confirmed when the soft launch will take place we’ll let you know. 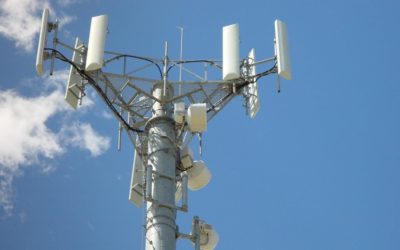 Where to buy unlocked phones in the UK

Tom Hanks has 'no respect' for people not wearing masks